Our Family of Workers 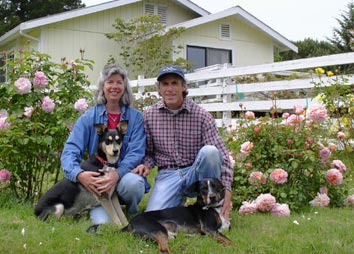 I suppose there's some interest in who works behind the pruners and computer so here it goes...

Here's a photo of Tracy, the man who started all this with his hobby of propagating roses. He's got his nose in Compassion at Gamble Gardens in Palo Alto, CA.  The Our Heritage link explains Tracy's career travels from Silicon Valley accounting to Humboldt County horticulture.

Then, you know if you've read the Our Heritage section, man meets woman, gives roses, 13 years later gives more roses, finally wedding bells, etc.  I'd been living in Washington state and in China for most of those 13 intervening years, either in college, working, teaching English or running an academic office at Stanford University (where I was just learning about html).  Here I am with our Chief Canine Officer and "daug-ter" Daphne (Dahlia Daffodil) Rosa canina Sclar (at the pound they named her Daisy, so we've given her a lot of flower nicknames starting with D). When we brought her home at about a year old our Daphne odora bush was in bloom (yes, we actually enjoy lots of non-rose plants) so right there she got her name. She's a 50-pound indoor lap dog that every paper said "shepherd mix" on. We've decided that she has a lot more Doberman and Terrier in her psyche. She's got her problems (of course us spoiling her might have something to do with it), but she's ours...you dog-people understand, I'm sure.

October 2001 we picked out "daug" #2 from the pound and since a storm was brewing on the drive home, we named him Storm, but of course he needed the obligatory rose and botanical names, so his full name is Storm Briar Dogwood Sclar. Here's a photo of him from the shelter webpage when he was a wee puppy.

They said he was about 7 months old when we brought him home (he'd been at the shelter 3 months!). Big sister was not too impressed with little brother.  He almost didn't make it past the "survivor vote" after the first week, but we've all eventually adjusted and can't imagine not having them together. They're not exactly inseparable, but they enjoy a good game over whatever toy is prized any particular day. Here's our official VP of Canine Affairs (i.e. "VP of Fun") photo. Doesn't he look distinguished with his ears brushed back and his slight underbite? You dog-people understand, I know you do. 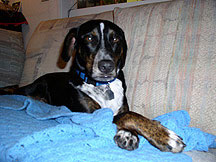 For quality control and soil amendment we bought baby Bunita Lajoie Miriam 'Spensiva Sclar in April 2000 (photographed here in front of Mme. Alfred Carriere). 'Spensiva' because, unthinking, we bought her the day before Easter!  She loves rose petals - only the ones without pesticides of course! She enjoys a very nice 2' x 6' cage inside of a large fenced area for supervised running, digging, jumping and dancing. Some day she'll have a pergola overhead like she had at our first home, built for her predecessors (see below). They needed the shade, I wanted the pergola for interest and Tracy wanted a reason to buy more climbers = win+win+win!

Then there's our supposed "Pest Control" team, Caruso III, Beverly, and 2001 baby hen McQueen. Our neighbor in San Jose was raising these small, under 2- pound Jungle Fowl bantams and we thought a couple to wander the backyard would help with sow bugs, slugs, etc. Well wrong...but they're a good conversation piece anyway. The only "bugs" they seem to enjoy are the worms in the composting piles, or the grubs, earwigs and cabbage moths that we hand carry over to them (!). I suppose along with the Rabbit they do contribute to our natural fertilizing program. Fortunately their 2002 country-born progeny do have a taste for sow bugs!

Unfortunately, the 2003 local hawks had a taste for them and after seeing one hen carried off and rescuing Caruso twice, we found them a safer home with a 4-H father and fowl hybridizer who has great plans for our flock.  We miss them, so we leave their photos here for posterity.  Maybe we'll get some bigger chickens in the future.  However, we still had a source for fresh eggs...

May 2002 we looked out the bedroom window and saw something different by the hose bib. Was it a duck, a goose, or what? It was just a toddler either way, no feathers, covered in down, but larger than a chick. On closer look the beak gave it away and Goostauf became a member of the outdoor family. By the end of summer he/she was fully grown and flying from one end of the yard to the other. We called him our CHO (Chief Honking Officer). He thinks he's a dog and he makes a pretty good one as he follows Tracy all around the yard. He spends a lot of time in his kiddie wading pool and when it's time to go to his pen he toddles right to it with Tracy walking behind him. Since our backyard is completely fenced in and he couldn't fly when we found him it's a mystery how he came to live with us. We just figure God decided that a goose would make some good entertainment for us, and as always, He was right. The biggest surprise came late January 2003 when Goostauf was protectively sitting on a crude nest of straw with a giant egg underneath, er...him!?  Goostauf instantly became Goostaufa, and now two dozen+ giant eggs later, we're still learning about our goose.

And again, unfortunately, something took Goosetaufa's life during the night in December 2003, so we didn't get to experience another egg laying season with her.  Who would have thought you could get so attached to a goose?  We miss her a lot, so we leave her photo up, too as she was so special to us for the time we had her.

And last, but not least, we have Golda the Goldfish, Tevya the White Cloud and Sprint the snail in a tank in the house.  (Well, we had Sprint, but he took a trip out of the tank and didn't last too much longer after the pet sitter rescued him off the carpet and plopped him back in the water...) They're really hard to photograph, so you'll just have to take our word for it!

Well, there you have it. Amazingly we had most of this in a little backyard just outside of downtown San Jose. As one friend exclaimed when visiting there: "Very efficient use of space!" Fortunately we were all able to move to Hydesville in November 2000, and have 4+ acres just south of Eureka in coastal northern California where we all have more room now. Of course we have a lot more help from the little guys, like lacewings, ladybugs, redringers, beetles, sparrows, cute little tree frogs, lizards, grass snakes, spiders, spiders and more spiders, etc. But we are most indebted to our Creator and Heavenly Father, as without Him none of this would exist or continue to grow. Besides "There's Always Room for One More Rose" our other motto is Soli Deo Gloria!

Most of the images on this site have been reduced in quality to save bandwidth.
Both they and their full-sized, high quality originals remain the property of their creators.
They are copyright protected and may not be snatched, copied, duplicated,
reproduced or otherwise fiddled with without prior written consent.