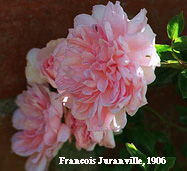 There is an endless debate about own-root versus grafted/budded rose plants. Depending on which catalog you read, or who you talk to, you'll hear both sides.

For the most part Heritage or Old Garden Roses have been grown on their own roots. They grow well into their shrubbier shapes being rooted from cuttings from the original plants found in old gardens and cemeteries. Own-root roses are propagated by rooting stem cuttings of one variety of rose. From the band size pots tyically sold, the plants will put out a few new full-sized canes each year and then reach mature height and width in 2-5 years, depending on the variety. Yes, they bloom according to variety during this maturing period.  Own root roses are not graded by cane size.  Grading is a practice done for bare-root grafted roses.  Miniature Roses are also propagated and grown on their own roots.

Hybrid Teas became popular in the 20th century and grafting a small bud from the desired plant onto a field-grown vigorous other variety rootstock became a way to mass produce the desired variety. Grafted bareroot roses are budded onto year-old field grown rootstocks, grown for another season and then dug, roots cleaned and stored in cold storage until they are shipped. Typically they reach mature size in 2-4 years because they've had an extra year of growth in a field . You can tell the difference between each type of rose bush by looking for the grafting knot where the variety purchased was budded onto the rootstock. Own-root roses will not have this knot at the base of the plant.

For AHR our initial propagation decision factor was space. We began our nursery in a small back yard in a downtown subdivision. We didn't have a field in which to mass produce roses and we wanted to remain a small and personal nursery. Our experience of own-root Heritage roses was so successful that we began experimenting with growing Hybrid Teas and all other rose classes on their own roots and had equal success. Once we moved and had more room we began offering some budded varieties, most notably those types of roses which grow best by grafting (desired variety to standard/trunk stock, to rootstock).

With that brief background, for the actual pros and cons of the two types of rose production we'll list the most commonly adhered to reasons here:

1. The three most common mass-produced rootstocks used in the USA are terribly infected with rose mosaic virus. Budded roses take on the virus of the rootstock even if the bud came from a virus-free variety. However, if a rose is grown own-root from a virus-free plant then the baby will remain virus free.  Conversersely, if the cutting for an own-root plant is taken from a virused Mother Plant, then the baby will carry the virus.  In the last decade it seems most major grafted rose producers have cleaned up their understock.  (Key thought: know your source).

2. Own-root roses are typically shipped in pots of moist soil, year round. When a rose is purchased in a pot it is usually very obvious that it's either alive or dead on arrival. Rose pots are full of healthy canes and roots and are waiting to be transplanted whenever the customer wants delivery. Their tender feeder roots have not gone through the trauma of a budded rose that is grown in a field for up to two years, pulled from the ground by machinery in the fall and kept in cold storage until shipped in spring. Roses from pots generally have no transplant shock when put in the ground. Grafted bareroot roses can only be shipped while dormant and may die in cold-storage but it's not obvious until they don't come out of dormancy months after being planted.

3. With own-root roses you never have to bother with removing unwanted canes (suckers) of the rootstock variety. De-suckering is very important for budded plants as without it the vigorous rootstock can take over and replace the original plant (this is THE reason your grafted yellow/purple/white/apricot rose is now blooming with the red flowers of Dr. Huey rootstock:

4. Own-root roses are typically more winter hardy, as a harsh winter can kill a rose plant to the ground, but if the roots are alive the rose will come back in the spring true to variety. Grafted roses will often die back to the bud union and so the only part alive in spring (the rootstock) is an undesired rose sending out canes and flowers. Rosarians in cold zones recommend planting the bud union certain depths to protect against this happening, with varying degrees of success.

5. Some feel that certain varieties do better on their own-roots, bloom more abundantly and are hardier as mentioned above. Others feel the same exact way about varieties of budded roses.  It's been our experience that young own-root plants are not strong enough to fight off some rose diseases, whereas grafted young plants can (just like grafted fruit trees that use different understocks for a variety of desired traits).

6. Sometimes an own-root rose will be a more well-behaved size than those budded onto vigorous rootstock. In other cases own-root and budded varieties grow at the same pace.

We hope that this information is helpful in getting educated on this particular controversy in rosedom. We find it fascinating that some of the most well known hybridizers are also turning to own-root propagation of their new varieties!  The largest wholesalers are also mass micro-producing own-root roses in laboratory test tubes from small tissue samples.

Most of the images on this site have been reduced in quality to save bandwidth.
Both they and their full-sized, high quality originals remain the property of their creators.
They are copyright protected and may not be snatched, copied, duplicated,
reproduced or otherwise fiddled with without prior written consent.